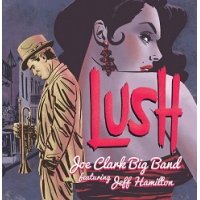 According to a Carl Sandburg poem, Chicago is “the city of big shoulders." There's a unique strength about Chicago that's different than New York or Los Angeles. Might it be suggested, therefore, that players emanating from the Windy City might also carry a bit more muscle, swagger and workmanlike focus? Perhaps.With Lush, his debut as leader, Chicago trumpeter/composer/arranger Joe Clark = 27881}} and his fine band unabashedly lay all of the above attributes out front in a performance ...