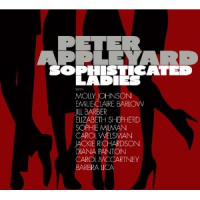 Celebrated Canadian vibraphonist Peter Appleyard made some waves on his last instrumental album, revisiting the past in a previously unreleased recording that captured a select group of jazz giants on the historic The Lost 1974 Session (Linus, 2011). Now, this 84 year-old jazz legend focuses on the present and surrounds himself with a phenomenal group of talented ladies who voice time-honored classic standards on Sophisticated Ladies. Though not the first album boasting this particular conceptual approach, it is the first ...

Peter Appleyard seems to have a way with the ladies. The octogenarian vibraphonist brings his virile mallet work to bear while escorting a dozen lovely songbirds through some smartly arranged standards on this, his second release the span of a few months. Appleyard started off the year by looking toward the past, issuing a previously unreleased all-star jam session from 1974, but his gaze is firmly on the present throughout Sophisticated Ladies. He hobnobs with some of the finest vocalists ...

A gem of a discovery, vibraphonist Peter Appleyard's The Lost 1974 Sessions is an important record, both artistically and a historically. Appleyard assembled most of clarinetist Benny Goodman's group in RCA's Toronto studios for a one of a kind opportunity when band in town for a concert. He called the ad hoc band the Jazz Giants, and this is perhaps the only place to hear these masters play and interact with one another.The perfect host and leader, Appleyard ...

Canadian vibraphonist, percussionist and composer Peter Appleyard has spent most of his professional career in Toronto. He has hosted his own radio and television programs, and was made an Officer of The Order of Canada in recognition of his musical accomplishments. He drew international acclaim as a member of Benny Goodman's jazz sextet during the early '70s, with whom he performed at Carnegie Hall in 1974. Appleyard saw a once in a lifetime opportunity, and reassembled most of the group ...

While the aggregation of all-star jazz men featured on this previously unreleased, decades-old session may seem random at first glance, the great Benny Goodman is actually the musical tie that binds them all. In September of 1974, vibraphonist Peter Appleyard was part of a particularly strong Goodman sextet that appeared at Carnegie Hall. Appleyard had his own gig in Toronto the following evening and, amazingly enough, everyone in the band, with the exception of drummer Grady Tate, was available. Appleyard ...