The life and times of guitarist extraordinaire Steve Khan stretch through a high volume of evolving chapters that fuse together like the passages of a finely crafted arrangement. An expansive conversation with Khan touched on a variety of memories. Still, this is perhaps the Reader's Digest version of the seventy-three years old musician and composer's remarkable journey. The fusion turned Latin guitarist has recorded over twenty studio albums and appears on nearly one hundred more records with other ... 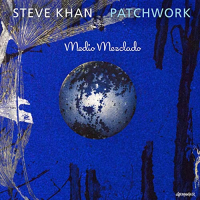 Amongst the many myths out there about music-making—especially in jazz, where the improvisation quotient is often so high—is that composing may, indeed, be work, but doesn't require the kind of relentless attention to detail that far more truthfully defines how many artists write and arrange their music. These days, one need only look to music by artists including Pat Metheny, Antonio Sanchez and Christian Scott aTunde Adjuah to find music conceived with intimate and painstaking detail while, at the same ... 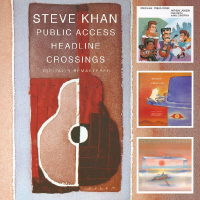 It's been a great couple of years for Steve Khan fans who are (relatively) new to the guitarist's work, especially his early releases, thanks to UK-based BGO Records. First, his '70s-era trio of fusion-centric LPs on Columbia Records, 1977's Tightrope, 1978's The Blue Man and 1979's Arrows, were remastered and reissued in a 2015 two-CD set, Tightrope / The Blue Man / Arrows. As fine as those records are, however, BGO's 2016 reissue of Khan's early '80s triptych, which has ...

Latin jazz has rarely featured the guitar, but that hasn't stopped Steve Khan. Backlog continues in the vein of previous albums including Parting Shot (Tone Center, 2011) and Subtext (Tone Center, 2014): creative Latin arrangements of Great American Songbook standards and modern jazz tunes that are rarely played in Latin style (or in any style, in the case of the more obscure choices). The two previous installments included a number of Khan originals, but Backlog is entirely devoted to covers. ...

In what could best be described as an enduring exploration, Steve Khan has undertaken the role of expanding and redefining the role of the guitar in the hybrid genre of Latin Jazz. Backlog continues with the concept established as far back as 2005 on The Green Field (Tone Center), in the transformation of straight-ahead jazz compositions into unique Khan improvisations drawing deeply from the Afro-Cuban tradition. The percussion duo of Marc Quiñones and Bobby Allende have been an ...

Steve Khan's love affair with Latin music germinated in the 1980's with his stellar Eyewitness recordings and continued to develop in a number of releases including 2011's Parting Shot and 2014's Subtext both on Tone Center Records. Backlog is third in this series and represents some of the esteemed jazz guitarist's finest work to date. A consummate musician, Khan's credits include heavy work in the '70s and '80s with pop and jazz icons Donald Fagen, Michael Brecker, ...