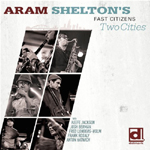 This is such an integral aspect of what they do, they make the case that the whole is greater than the sum of the parts. For example, on the opening title track, both Keefe Jackson, on tenor sax, and ...