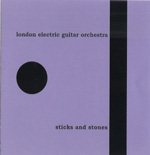 This EP has a running time of just under twenty minutes and consists of one extended piece (indexed in three separate tracks). Recorded in 2001, the piece is almost the distilled essence of the London Electric Guitar Orchestra. In this expanded eleven-member version of the group, its guiding principles remain solid; as ever, the music is more about sound and experimentation than melody and virtuosity.

The album title refers to two contrasting sounds: a stick = attack, a stone = ...