Bob Drake: What Day Is It? 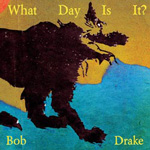 Multi-instrumentalist, composer and noted producer Bob Drake transmits the vibe of a mad scientist at work. As a member or producer of numerous cutting edge progressive rock bands, as well as throughout his lengthy solo career, Drake has generally found ways to mingle various forms of Americana with abstract motifs.

This reissue of his first solo album, recorded during 1992-93, features drummer Dave Kerman (of 5UU's and Thinking Plague) on selected tracks. Drake's outlandish lyricism might suggest that he's communicating ...

You never know where guitarist, Bob Drake will end up. Besides production duties for rapper, Ice T, and his affiliation with the ultra-progressive rock band, “The 5UUS,” Drake’s solo career stands as a paradigm of disparity. From his own words: “I decided to try doing an album based around the classical (nylon-stringed) guitar and vocals, with an overall connecting theme: each song would tell a short, weird or horrible story.” With this outing, recorded in his barn, Drake flirts with ...