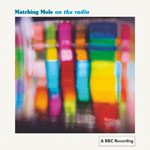 Matching Mole may have lasted just under a year when it surfaced 35 years ago, but public interest in drummer/vocalist Robert Wyatt's first post-Soft Machine project continues to be strong. On the Radio isn't the first archival live release, and nearly three-quarters of the material was previously available, but only for a short time. This remastered reissue of five BBC Radio studio and live dates features significantly improved sound, but what sets it apart from the earlier Windsong BBC release ...

Drummer/vocalist Robert Wyatt formed this band, soon after his departure from the now legendary Soft Machine aggregation. With only two albums under its belt, Matching Mole disbanded in 1972, whereas Cuneiform Records has furthered its legacy due to the 2001 release titled Smoke Signals. This outing follows suit so to speak, as the label resurrects additional live material culled from the band’s 1972 tour. A portion of the ensemble’s stock material is presented here along with a clever rendition of ...

Ardent fans of the oft fabled British Canterbury school of progressive music should welcome this new release by a band whose sole recorded output resulted in two acclaimed 1972 recordings. Thus, the name “Matching Mole” was derived from the French translation of the great British band, “Soft Machine” (machine molle), although in 1971 drummer Robert Wyatt had left the group to record a solo album, which represents an event that ultimately spawned “Matching Mole”

With these newly unearthed recordings culled ...