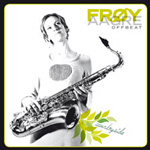 Composed and arranged by the saxophonist/leader, each track has obviously been worked over with care. While the longest song clocks in at just five minutes, each work features a palpable sense of movement and development. Featuring groaning ...