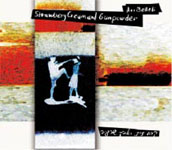 Israeli composer, bassist and vocalist Avi Belleli is a well-known entity in his native land, namely with the commercially viable rock band Tractors Revenge. Here, the artist's compositions are performed live in Jerusalem with the assistance of dance choreographer Yasmeen Godder and her “Bloody Bench Players.

There are no listings that denote the instruments used for this rather haunting yet sometimes frolicsome set, influenced by recent events in the Middle East. With reverberating guitar lines and electronics-based ...