About The Flatlands Collective 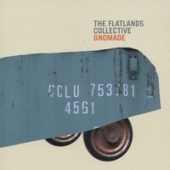 The Flatlands Collective is a small big band in the Chicago tradition of various Ken Vandermark ensembles. Its leader, saxophonist Jorrit Dijkstra is Dutch, which confuses the clear picture, in that this music is at times more folkishly American than American music.

But then again, this whole Chicago revival of jazz has had deep European roots.