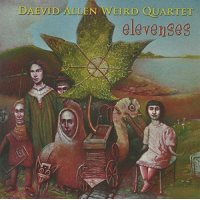 Australian, Daevid Allen was one of the original progressive rock wizards who founded Soft Machine and Gong, nestled within the British Canterbury movement and beyond. Sadly, he passed away on March 13, 2016. Elevenses will stand-- barring any reissues from the vault--as his final album and the second release by his Weird Quartet. Allen's solo jaunts are quite varied and includes his University of Errors band amid other projects. Perhaps The Daily Telegraph sums up his legacy and ... 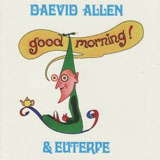 When Daevid Allen either left (or was forced to leave) his flagship band Gong in 1974 following the release of the group's classic seminal space-rock, nascent jamband Radio Gnome Invisible trilogy, where he'd go next was anybody's guess. Gong would gradually transition into a fusion group led by percussionist Pierre Moerlen, while Allen retired to his home on the Spanish island of Mallorca and, working with the Mallorcan-based Euterpe and a couple of multi-track tape recorders, recorded Good Morning!--a surprisingly ...