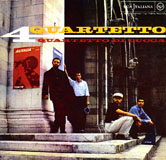 Quartetto was founded by double-bassist Giovanni Tommaso, together with a group of like-minded musicians, and was named after their ...