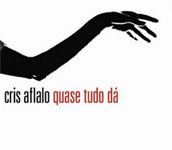 The elegant and intelligent singer Cris Aflalo made her debut five years ago with Só Xer êm--a tribute to folk-pop composer Xerem (who also happened to be her grandfather) that was loving without being too reverent. It was one of the best albums of any kind released in 2004--but she's been gone far too long.

So it was thrilling to come across the release of Quase Tudo Dá is a thrilling return by Aflalo, and this time it's not another ...