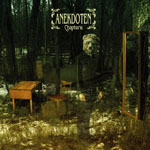 The influence of art rock bands like King Crimson continue to be felt into the new millennium, but when progressive rock began to make a comeback in the early 1990s--first in the underground, then in recent times to an even larger audience--albums that had been overlooked back in the day suddenly became hugely influential. Anekdoten began life as a Crimson tribute band, gradually introducing its own material into the mix and, ultimately, becoming an original band, taking the symphonic side ...