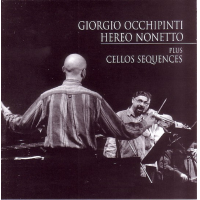 Pianist/composer/conductor Giorgio Occhipinti and his 'Hereo Nonetto' (nonet) invites the listener to partake on a ubiquitous journey consisting of disparate musical notions and multifarious implementations in concert with intermittent strings sequences ('Cellos Sequences') by cellists Tiziana Cavaleri and Vito Amatulli.