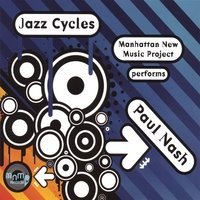 Paul Nash--composer, teacher, and guitarist--learned in 2003 that he had a fatal brain tumor. He decided to leave a final legacy in a project that would remaster and reissue his earlier Paul Nash Ensemble recordings. This is the first of two discs--the proceeds of which will go to a fund to continue the promotion of further work. The Manhattan New Project is the septet of colleagues and friends that Nash selected to record this extraordinarily rich collection ...

In 2005, visionary composer/guitarist Paul Nash lost his battle with brain cancer. Some six weeks prior to his passing, Nash was able to complete production on Jazz Cycles, a suite orchestrated for his ensemble, Manhattan New Music Project (MNMP). The resulting disc is chock-full of intricate writing, spontaneous group interplay and staggering solos. Stylistically, Nash's music runs the gamut of contemporary jazz; from free-form, to post-bop to funk.

The ensemble work throughout the disc's fifteen tracks is stunning. In the ...