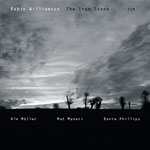 Singer/multi-instrumentalist Robin Williamson's The Iron Stone is one of his most unusual ones, because it is a careful blend between experimental, improvised music and poetry. Recorded in the Welsh countryside, Williamson's third outing for ECM continues to evolve and develop what began on 2002's Skirting The River Road. While previously he favored and looked for inspiration in the words of Dylan Thomas, Walt Whitman and William Blake, this time he draws on the verse of Thomas Wyatt, Walter Raleigh, John ...