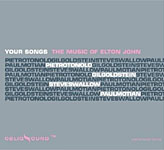 Who would have thought Elton John's music could resonate into jazzmen's hearts deep enough to dare record a whole album of his songs? Well, whoever or wherever it comes from, a nice melody is a nice melody, one could rightfully retort to the skeptical, frowning few. Saxophonist Pietro Tonolo, a mainstay on the Italian jazz scene, convincingly rises to producer Michele Locatelli's somewhat challenging idea. Supporting him in the venture are deconstructivist drummer Paul Motian, bassist Steve Swallow and Grammy ...

In order to thrive as an independent jazz label, you've got to have a philosophy. It may be as broad as an overall aesthetic or as refined as a specific genre. Certain artists will draw fans to whatever label they're on--Keith Jarrett, for example, brings a lot of listeners to ECM. But to transcend individual musicians on a roster and engender a true brand loyalty that entices people to check out releases through trust in what the label is about--that ...

Italy-based EGEA Records states in its press release that it is “more than just a record label. It's a music concept whose very name suggests the desire to explore the features of a totally Mediterranean identity." And releases including Il Circo and Mari Pintau would definitely support that philosophy. But while three out of four of the musicians on Oltremare are Italian, the music moves, this time, farther north, away from the sea and deeper into continental Europe for a ...