A great big heapin' helping of a certain blind pianist's work provides the anchor for this time's outing, as we look at one disc from six of a new box set and then fan out to look at a little known second-hand disciple of the great man along with two other stylists further removed. Pop matters further reveals Mike's ongoing obsession with all things Buckley.Playlist Discussion of Lennie Tristano's album Personal Recordings (Dot Time / Mosaic) 4:07 Discussion ...

Pianist Lennie Tristano was a very visible participant in the modern jazz innovations of the mid-1940s through the early 1950s, winning polls and participating in all-star jam sessions. Yet his music was always a little outside the mainstream and was increasingly so as he began to experiment with fully improvised performances by 1947. While his focus on low dynamics and long flowing lines has been seen as a precursor of the cool school that arose early in the 1950s, the ...

The following is an excerpt from the “Lennie Tristano: The Passionate Intellectual" chapter of Bebop, Swing, and Bella Musica: Jazz and the Italian American Experience by Bill Dal Cerro and David Anthony Witter (Bella Musica Publishing, 2015). World War II and the atomic bomb changed not only the political landscape, but art, architecture and music as well. In architecture, “Googie" or “Ray-Gun Gothic" combined many of the traditional elements introduced by Frank Lloyd Wright almost forty years ...

In 1949 Lennie Tristano (1919-78) recorded “Intuition and “Digression , two of the earliest examples of freely improvised jazz. Though the approaches and content differ greatly, authors Peter Ind and Eunmi Shim agree on the following: Tristano best represents how a non-commercial artist can be “air-brushed out of jazz history as an extremely influential teacher. Jazz Visions: Lennie Tristano and His Legacy Peter Ind Paperback; 192 pages ISBN: 1845530454 ... 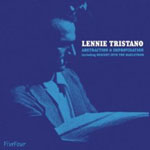 Pianist, composer and educator Lennie Tristano's place in the history of the music seems anomalous from the vantage point of the twenty-first century. His music was arguably as iconoclastic as that of Charlie Parker's and Dizzy Gillespie's and equally of its time, but in contrast with that it can come across as colorless and one-dimensional. His influence has been limited to the likes of sax players Warne Marsh and Lee Konitz, though amongst his fellow pianists only names such as ...