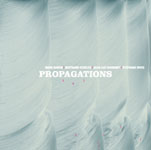 Fans and readers of the popular books by neurologist Dr. Oliver Sacks know that the brain reacts to sounds in numerous ways. From his book Musicophilia (Knopf, 2007), we learn of a woman who has seizures from the folk music of her country, and of comatose patients that are reanimated by song. Sacks tells us that it can be melody that invigorates the brain; but it can also be simple pitch, tone, and texture.

Maybe that is why this part-minimalist, ...