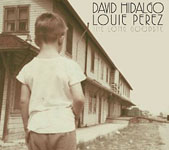 The creative impulse that David Hidalgo and Louie Perez bring to Los Lobos might well be camouflaged within the collective efforts of the band that produces such memorable work as Kiko (Slash/Warner Bros, 1992) and The Town and The City (Hollywood, 2006), but this collection of easygoing, informal recordings by the pair illuminate just how they spark the ingenuity of that band from east LA.

The simplicity inherent in this set of previously unreleased recordings, completed over a span of ...