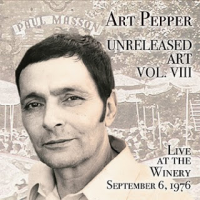 Laurie Pepper, widow of alto saxophonist Art Pepper, has been shepherding the artist's discography since the turn of the millenia. Unreleased Art Vol. VIII: Live At The Winery, September 6, 1976 reveals there may be no end in sight for unreleased material from this important jazz musician. Ms. Pepper has done a couple of things different this time. One, she is releasing a performance by Pepper early in his comeback, after the release of Living Legend (Contemporary, 1975), Pepper's first recording since 1960's Intensity (Contemporary) and before his triumphant appearance at New York City's Village Vanguard, documented on The Complete Village Vanguard Sessions (Contemporary, 1977). (Note: Pepper is captured on a handful of live recordings during those 15 years, but these were largely bootlegs that made their way to vinyl and then CD.)

Second, she releases a performance where Pepper plays with "alternate" sidemen, artists not associated with Pepper at the height of his comeback (like pianists George Cables and Milcho Leviev, bassists Tony Dumas and Bob Magnusson and drummers Billy Higgins and Carl Burnette). The music recorded here is somewhat of a "missing link" and is, indeed, revelatory, almost in the biblical sense. Pepper had been working as an accountant in the bakery of a fellow Synanon veteran when he emerged to play "casuals" (weddings and Bar Mitzvahs) and, eventually to begin recording again.

There is nothing Romantic about chemical dependency or its consequences. It does not enhance creativity; it exists as an impediment to all that could be. Nor should one believe the artist is not changed by the experience: not Charlie Parker, not Frank Morgan, not Art Pepper. The Art Pepper here in the Bicentennial is dramatically different from that of these previous recordings. His tone is harsher and more dry and he still shows the remnants of John Coltrane, who captured his imagination in the 1960s. But, Pepper in the mid-1970s was no developing artist unfinished; he was fully realized and in nuclear transition. He is the musical sum of all he has done and all he has seen.

In 1979, Art and Laurie Pepper published perhaps the finest jazz biography written, Straight Life: the Story of Art Pepper (Da Capo Press). It provides a roadmap and discography where Pepper's work can be conveniently identified and considered in context. According to Pepper's discography at Jazzdisco.org, the altoist's appearance at the Paul Masson Winery, September 6, 1976 took place between his recording as a sideman on Art Farmer: On The Road (Contemporary, 1976) and Pepper's own follow-up to Living Legand, The Trip (Contemporary, 1976). Pepper was getting serious traction just ahead of his first tour of Japan early in 1977. He had been teaching jazz clinics and playing casuals, getting ready for the rest of his productive but too-short life.

Live At The Winery, September 6, 1976 is made up of six songs inner-dispersed with Pepper's grateful and sincere stage banter. The disc opens with possibly Pepper's most passionate reading of the Juan Tizol classic "Caravan." Written for the Duke Ellington orchestra, "Caravan" was composed with a Middle Eastern flavor in mind, but in the hands of Pepper and local pianist Smith Dobson, it is a samba bullet shot from a Latin jazz gun. Pepper gives a long introduction before steering into the familiar theme, fighting a guerrilla war for the next ten minutes of exhilarating performance.

Pepper follows with an angular original composition, "Ophelia" from Living Legend, that would show up many more times in his live performances. A ballad master, Pepper presents "Here's That Rainy Day" also from Living Legend and earlier, displaying the complete command of the form that would reach its pinnacle on Winter Moon (Galaxy, 1980). The band follows with "What Laurie Likes," a blues-funk piece suggesting Pepper's future masterpiece "Red Car" from his next studio recording.

Pepper closes with his be bop-infused "Straight Life" and "Saratoga Blues" demonstrating that he is a master of that idiom also. "Caravan" is a revelation on this recording as is "Make a List (Make a Wish)" from Art Pepper: Unreleased Art, Vol. III; The Croydon Concert, May 14, 1981 (Widow's Taste, 2008). Pepper was capable of reinvention, evolution and perfection in his quest to become the greatest alto saxophonist. Mission accomplished.