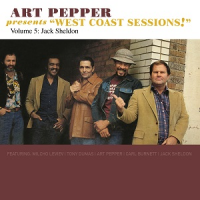 Of the six volumes making up this set of Art Pepper recordings, this one with trumpeter/vocalist/all-around-character Jack Sheldon is my favorite. Sheldon and Pepper were fixtures on the West Coast jazz scene for many years and had previously recorded together on many occasions over 30 years, most notably on The Return of Art Pepper and Smack Up (Contemporary, 1960). They were comfortable with one another. Sheldon always understood Pepper, despite the destinations of their dramatically different career arcs.

What the producers at Atlas Records wanted was some bona fide 1950s' West Coast jazz. It is a bit disingenuous to call these recording bona fide as many were recorded 20 and 30 year later. That said, Pepper's collaboration with Jack Sheldon comes closest to achieving the unrealistic goal. These are bright and talkative performances, easily played and obviously enjoyed by the participants. The repertoire is right out of Pepper's '50s band book: "Softly, as in a Morning Sunrise" and "The Way You Look Tonight" being staples. Several of the songs were reprised from the pair's previous recording on The Return of Art Pepper ("Broadway," "Angel Wings," "Minority"), which also included Shelly Manne. Sheldon is in very fine form, even singing in the original on "Historia de us Amor." These performances are real treats. 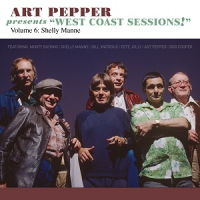 The Shelly Manne edition of West Coast Sessions is the oldest fashion of all of the recordings. This recording has much more of a swing era flavor in the repertoire and performance when compared with the others. The inclusion of pianist Pete Jolly accentuates this swing-era element in his Oscar Peterson-styled blues playing on "Hollywood Jam Blues." Jolly's contributions are wordy and voluble, full of all order of ornate phrasing. The three horn from of Pepper, tenor saxophonist Bob Cooper and trombonist Bill Watrous adds to the swing-era environment by representing the most stripped down of big bands. All three understand the material, performing it with a late 1940s flair. "Just Friends" is given a jaunty treatment with near Dixieland counterpoint. The band sounds comfortable and relaxed.

Relaxed. This is what Pepper was being the ostensible, yet unnamed, leader of these sessions. He did not feel the leadership pressure for the recordings and was more relaxed than on name recordings. Here Pepper plays with great mirth and gentle release. These are not the near-tortured performances captured on The Complete Village Vanguard Sessions (Contemporary, 1977/1995). Here, Pepper is in complete command, comfortable with his sidemen, making some of the best music of his career. This is a fitting way to end an acclaimed series. Critic's Note: Anno Domini 2017, marks the 100th Anniversary of recorded jazz, deftly noted by the release of the shellac "Dixieland Jass Band One-Step (A)/Livery Stable Blues (B)," Victor 18255, recorded February 26, 1917 and released March 7, 1917. For perspective, my father was 18 months old and my mother was yet to be born for two years. Yes, it all remains that close. It is also the twentieth anniversary of me writing for All About Jazz. The first recording I reviewed for the magazine was Art Pepper's San Francisco Samba (Contemporary, 1997), published December 1, 1997. I am using this present review as part of a series noting my twentieth anniversary with the magazine and paying special tribute to my fellow writers at All About Jazz, Publisher Michael Ricci, and groovy people like Terri Hinte and Laurie Pepper, who I would otherwise have never met.