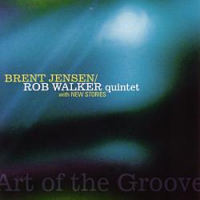 The Brent Jensen/Rob Walker Quintet opens in a mellow groove and stays there much of the way on this backward- glancing yet quite contemporary album that wouldn’t have been out of place in the bop-based Blue Note / Prestige catalogs of the late ‘50s–early ‘60s. Alto saxophonist Jensen and trumpeter Walker offer an earnest tribute to their musical predecessors—especially the legendary Miles Davis—without imitating them, choosing instead to invoke the spirit of the bop era while giving it their own modern spin, with substantial help from the dexterous New Stories Trio (Seales, Miller, Bishop), which has been performing as a unit for eighteen years and has mastered the art of discretion.

The program consists of five original compositions by Walker, two by Jensen and a couple of handsome showcases for the latter’s burnished alto, the standards “It Could Happen to You” and “You Go to My Head.” The opener, Walker’s “Straight from Miles,” has a bright, bluesy ambiance reminiscent of the classic Davis quintet, underscored by thoughtful statements from Walker, Jensen and bassist Miller. Walker also wrote “Art of the Groove,” “Evan’s Pen,” “Later” and a second explicit tribute to Miles, “Dewey’s Steps,” while Jensen chipped in with the ebullient “Danza Callejera” and wistful “Anne Rose.”

Jensen and Walker are persuasive improvisers, as is Seales, and the quintet quickly embraces a compatible groove and won’t let go. That’s good news for listeners, especially those who appreciate traditional bop with a progressive point of view.

Straight from Miles; It Could Happen to You; Art of the Groove; Evan