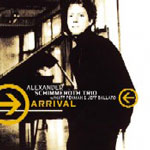 We live in a time where immediate results are paramount. If a movie doesn't go blockbuster in its first weekend, it's considered a failure. There was actually a time when a film could gain its audience gradually—sometimes over a period of months—and become a sleeper hit. Similarly with television: if a show doesn't garner strong ratings in the first few episodes, its head falls on the chopping block. It's not unreasonable to believe that Seinfeld, which suffered a lukewarm response during its first two seasons, wouldn't stand a chance today.

And so the parallel with young musicians coming onto the scene today. Without a strong hook for marketing machines to grab onto, as they have found for artists including the Bad Plus or E.S.T., what chance does a young player have with the ever-increasing number of independent labels flooding the market with new work? And what of the pressure on young performers to produce from the get-go, whereas in past decades there has been an environment of mentoring, where up-and-comers work with and learn from well-established artists?

The answer to the first question is that, fortunately, there are labels like Fresh Sound New Talent, which has largely devoted itself to bringing attention to emerging artists. Over the course of the past ten years, the label has developed a reputation that has engendered a certain degree of brand loyalty; if it's on Fresh Sound, it must, at least, be worth checking out. Fresh Sound is where artists including pianist Brad Mehldau, guitarist Kurt Rosenwinkel, and even the Bad Plus got their start.

And so, with the release of pianist Alexander Schimmeroth's debut, Arrival, Fresh Sound once again brings another new artist to the fore. Unassuming, without any kind of shtick, Schimmeroth is, quite simply, a fine young pianist with an elegant touch, a refined sense of swing, and a refreshingly modern approach to the mainstream. Five original compositions demonstrate the kind of thinking that, like west coast pianist Alan Pasqua on his new release, My New Old Friend, hides more challenging constructs within an easy-on-the-ears approach. Schimmeroth also covers three well-heeled standards, bringing an intriguing new complexion to Oscar Pettiford's "Bohemia After Dark. On this tune Schimmeroth shows his true mettle, reworking the head with the kind of across-the-bar mentality that makes it almost impossible to find the downbeat until the trio settles into the relaxed swing of the solo section.

Bassist Matt Penman, another Fresh Sound artist, and drummer Jeff Ballard—arguably one of the more inventive drummers to emerge in the past ten years and best known for his work with pianist Chick Corea—create a backdrop that both supports and challenges Schimmeroth, who is a lyrical, thematically-minded soloist.

And so, in these times of instant gratification, will Schimmeroth survive? It's too early to tell, but clearly, if given the time, he has the raw materials to evolve into a player and composer of some significance.

Visit Alexander Schimmeroth on the web.