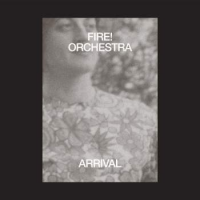 The ancient Zen art of decluttering has found modern favour as a mindful practice. Letting go of things is, perhaps, a way of breaking with the past. In the years since its inception, the Nordic big band Fire! Orchestra has jettisoned about half its original cast. Now down to a mere fourteen members, the outfit has accordingly made its most spacious album yet.

The core trio of musical director / saxophonist Mats Gustafsson, bassist Johan Berthling and drummer Andreas Werliin is still intact, along with a string quartet and a great deal else. Newcomers to the group's euphony will hear a line of tradition drawn from swing and bop, through to Parisian proggers Magma and the German art commune Amon Düül II. In other words, expect to be boggled and bombshelled every step of the way.

"(I Am A) Horizon" opens with quizzical violin and probing oboe, but there is a gradual swoop into psyched warpings. Electric keyboard clunks herald the first vocal turn, so newbies should prepare for the vivid sung experience that is Mariam Wallentin and Sofia Jernberg. After soulful balladry over a slumbering beat and jittery sax, the two voices split asunder—one sultry, the other searing. This same sense of awe, verging on the ecstatic, carries into "Weekends (The Soil Is Calling)." Word-busy verses find a top harmony that's almost off the known musical scale. The piece then slowly skronks into the mystic, closing on ritualised chants such as "The nights are black and white/And this is where it all ends."

1960s guitar virtuoso Robbie Basho wrote the pensive "Blue Crystal Fire," covered by many acts including Holly Macve and Mary Ocher. Here, the number is strangeness personified, as reedy-bassy breaths meet a gentle glow of guitar, like something being imbued with magic. An outpouring of silvery vocals flows around such lines as "Smooth singing sunshine/Wrap your blanket round me." More otherworldly croons feature on "Silver Trees" over looping bass, with puckish brass and strings, to end somewhere between a rap and a rhapsody. "Dressed In Smoke, Blown Away" has hoarse sax against writhing violins, then "(Beneath) The Edge Of Life" rides on storm-tossed Celtic arrangements. Closing cut "At Last I Am Free" comes from the Chic songbook and is played straight as an elegant ballad after its opening frailty.

Precious events in life and nature are given a voice on Arrival by Gustafsson's stellar ensemble. This is an album where the mystery of miraculous skills seems ever present.

(I Am A) Horizon; Weekends (The Soil Is Calling); Blue Crystal Fire; Silver Trees; Dressed In Smoke, Blown Away; (Beneath) The Edge Of Life; At Last I Am Free.