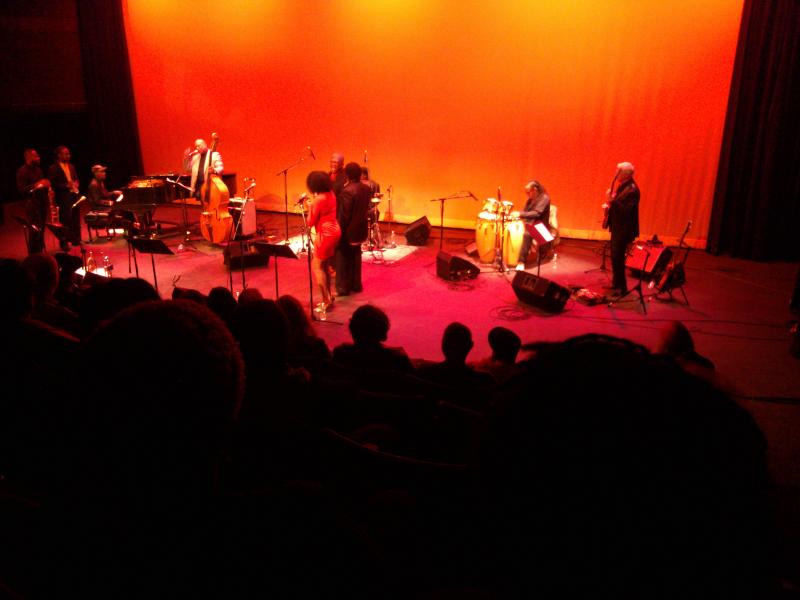 Philadelphia-based Lifeline Music Coalition has for over a decade sponsored jazz events which are eclectic in taste and attract fans by making the music listenable and providing enjoyable atmospherics. Thus it has been with their Philadelphia Jazz and Poetry Festival, West Oak Lane Jazz and Arts Festival, Woodmere Art Museum Jazz Series, and Philadelphia United Jazz Festival. Their emphasis on accessibility combined with serious music making was carried forward in this concert of Motown Records standards featuring Lifeline co-founder Warren Oree's Arpeggio Jazz Ensemble. The concert's popularity a few weeks prior required the need for an extra performance to accommodate the overflow, which gave this reviewer, a serious jazz connoisseur who also harbors nostalgia for the Motown sound, a chance to catch the event.

Jazz and Motown were wedded from the beginning, when Barry Gordy recruited musicians from the hot Detroit jazz clubs to work with his soon to be top-of-the-chart singers like the Temptations, The Four Tops, "Smokey" Robinson, and Stevie Wonder. In particular, the The Funk Brothers migrated from the jazz scene to Motown Records, providing backup for pop music like no others before them. Over the years, performers and venues have tried to capture the Motown sound with a jazz twist with varying degrees of success. The two pitfalls to which they have sometimes been susceptible are, on the one hand, to imitate the Motown performers and, on the other, to tack on jazz fusion and other styles that have little to do with the Motown tradition.

In this concert, the Arpeggio Jazz Ensemble made smart moves to avoid either trap. Their expanded ensemble using bassist Oree's well-crafted arrangements, took the essence of the Motown sound and built it up jazz-wise in extended versions that gave ample opportunity for improvising and development. Nobody tried to outdo or outsmart Motown, nor, on the other hand, did they try to "sound like" Diana Ross, "Smokey" Robinson, the Funk Brothers, or anything of the kind. Instead, they got the rhythm, momentum, inflections, and essence of the Motown sound just right, while not apologizing for being themselves. The result was a rip-roaring testament to Motown that was "manna from heaven" to the eclectic audience, while the more sophisticated listeners could appreciate the creativity, the swing, and the precision that could only be concatenated by seasoned jazz musicians.

The vocals were aptly taken care of by Roy Richardson, who doubled on saxophones, and Pat Scot, both of whom brought R&B and gospel flavors to bear. They rocked the "Motown Sound" and body movements just by being themselves. For example, in "Signed, sealed, and Delivered," it was the song and not the voice of Stevie Wonder that they captured, thank God! The music was so enticing in itself, that you forgot whether it was the Temptations, Martha and the Vandellas, or Smokey Robinson who recorded it. But, judging from the excited shoulder-shaking and finger-snapping, everyone was going back in time, immersed in the Motown era's unique brand of swing.

Bassist Oree, along with Arpeggio drummer Greg "Ju Ju" Jones and percussionist Douglas Edwards unwaveringly maintained the rhythmic propulsion. The horns, headed up by the revered Umar Raheem's distinctive Philly style with a touch of Sun Ra and the avant-garde, took jazz licks that complemented rather than intruded upon the vocals. Most notable among the instrumentalists was guitarist Frank Butrey, who can play every kind of music ever written and who dared to take the kind of risks that makes jazz exciting.

It's no accident that this kind of concert could be successfully pulled off in Philadelphia, where Kenny Gamble and Leon Huff grabbed onto the Motown sound and produced many hits of their own. Oree's bass playing and arrangements, not to mention his dark risqué manner of story telling as narrator/emcee, came right out of the Gamble and Huff play book.