Alcyona: Around The Sun 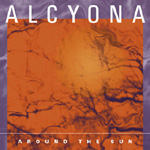 The young pianist and composer Alcyona, until recently known as Alcyona Mick, is emerging as an original new voice on the British jazz scene. She's still only 24 (or just turned 25) years old, but her band's performances during the past year or so have several times overturned their "support act" billings.

An alumnus of Birmingham Conservatoire (where she had the good fortune to be tutored by the distinctive Liam Noble) and London's Royal Academy of Music, Alcyona's style includes traces of Thelonious Monk and Lennie Tristano, along with influences from the European classical tradition (Debussy and Messiaen suggest themselves). It's spacious, poised, harmonically rich but understated music, sometimes playful and sometimes dark, and somehow very feminine. Among Alcyona's intriguing arranging signatures is the use of long held tones played by the two horns in close harmony, microcosms of sound which suggest bigger pictures the longer you tune into them and the more her piano interacts with them.

Alcyona's debut album, Around The Sun, is to be welcomed as a testament of her early promise, but it was recorded two and a half years ago, in 2004, and she has matured considerably as a composer, arranger and bandleader since the sessions. The disc will be of interest primarily to those who've recently heard Alcyona live, and want to document the opener in what will hopefully be a long and developing discography.

The band is tremendous. Tenor saxophonist Mark Hanslip mostly favours a purified, unreedy tone, but his playing is too sinewy and rhythmically engaged to be called pastel or limpid. Trumpeter and flugelhornist Robbie Robson is more extroverted—his impish playing on the Monk tribute, "Monkey," sticks in the mind long after the album has ended—and Phil Donkin is an agile and creative bassist. Asaf Sirkis and John Blease are both energised and listening drummers.

Good things can be expected of Alcyona. Watch out for her.