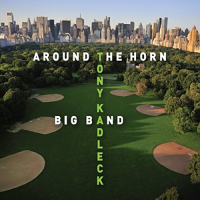 Tony Kadleck, who has done almost everything one can do on a trumpet, adds the designation big-band leader to his resume with Around the Horn, an impressive debut CD for which he has written all the charts and enlisted a group of the New York area's A-list musicians to interpret them. If leadership is best imparted by example, Kadleck shouldn't have a care in the world, as his discography includes more than eighty albums from pop to blues to jazz and various genres in between. An abbreviated inventory of the (big) names with whom he has played and recorded reads like a who's who of showbiz royalty: Frank Sinatra, Tony Bennett, Michel Legrand, Barbra Streisand, Gladys Knight, Liza Minnelli, Dionne Warwick, Johnny Cash, Harry Connick Jr., Jane Monheit, Bernadette Peters, Elton John, Natalie Cole, Audra McDonald, Sting, Ray Charles, Anne Murray, Michael Jackson, Chaka Khan, Aretha Franklin, Mandy Patinkin . . . the list goes on. That's in addition to Kadleck's many commercial gigs, performances as a sideman in big bands, Broadway shows and awards ceremonies, and steady work as an educator.

How does that broad experience play out in a big-band environment? In this case, quite well indeed. Kadleck, as it turns out, is a longtime admirer of large ensembles who has always looked forward to leading one of his own but waited until he was ready. The ten arrangements herein unwrapped are of uniformly high quality, encompassing songs by composers as diverse as Legrand, John Scofield, Stevie Wonder, Marvin Gaye, Cannonball Adderley, Leonard Bernstein, Antonio Carlos Jobim and the late saxophonist Michael Brecker (on whose panoramic "African Skies" his brother, trumpeter Randy Brecker, appears as guest soloist). Adderley's Basie-like "Wabash," which should be heard more often, is a special delight, an irrepressible charmer with solos to match by pianist Mike Holober and altos David Mann and Aaron Heick. Kadleck, who leads the exemplary trumpet section on seven numbers, is a dazzling soloist (on trumpet and flugel) on Legrand's exquisite ballad, "How Do You Keep the Music Playing?"

There are some heavy back-beats on Scofield's "Green Tea" and Gaye's "What's Going On," which drummer Dave Ratajczak and the rhythm section master with ease. While Wonder isn't known as a jazz writer, he could well be if his engaging themes, "Creepin'" and "Don't You Worry 'Bout a Thing," were used to gauge his proficiency. Bernstein's ardent "One Hand, One Heart" (from the Broadway blockbuster West Side Story) precedes Jobim's lyrical "Look to the Sky" and the Tommy Dorsey evergreen "I'm Getting Sentimental Over You," which closes the album on an exhilarating note. And speaking of notes, other soloists of note include alto Andy Snitzer, trombonists Michael Davis and Keith O'Quinn, tenor Jason Rigby, clarinetist Charles Pillow, guitarist Pete McCann and pianist Henry Hey.

Superb band, admirable charts, persuasive soloists. In the words of Ira Gershwin, who could ask for anything more? Except, that is, for more of the same.

Green Tea; Creepin’; African Skies; What’s Going On; Wabash; How Do You Keep the Music Playing?; Don’t You Worry ‘Bout a Thing; One Hand, One Heart; Look to the Sky; I’m Getting Sentimental Over You.