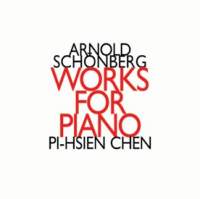 The very first striking aspect of Arnold Schönberg's Works for Piano, is that few of these piano pieces are longer than a few minutes; some of them, the fragments, are not even that long. However, their impact goes far beyond bringing absolute delight to the ear; these are works of a highly evolved artist, whose significance as perhaps the central composer of the twentieth century cannot be understated. The oeuvre represented on this album comprises his entire piano repertoire—all of six pieces. These definitive works give truth to the suggestion that there is no typical Schönberg. Approachable, but not "easy" in the commercially safe sense of the term, they are remarkable for their historical appearance at important periods in the composer's life.

The three opening pieces from 1894 are stirring studies in the exploration of the keyboard. The three pieces from 1909, Opus II, mark Schönberg's transition towards that period that is somewhat incorrectly described as his atonal period. Deeper listening suggests how the composer magically loosened his hold on the keys of the piano responsible for conventional harmonic functions. As the notes, there is the sense of a beautiful relationship between the dissonance of symmetry. Much of this music, including the works from the literature of Opus 19, are stylistically similar to his larger works such as Pierrot Luniere.

Later works like Opus 23 find Schönberg seemingly redefining the role of tonalism in his music again. Spare and exquisitely colored, these pieces represent a sort of reductionism normally associated with Schönberg's pupil, Anton Webern. The compositions under Opus 23 are remarkable for their form, especially that which suggests a radically composed waltz. The "Suite für Klavier Opus 25" is a remarkable series of songs and dances, including a gigue, gavotte and superb minuet, which might suggest Schönberg's unerring sense of history. The utterly glacial clarity of the works under Opus 33 (a & b) mark a return by Schönberg to his roots of expressive, highly emotional music.

Pianist Pi-Hsien Chen has made remarkable interpretations of these works by Schönberg, providing a reminder of the relevance of the master in all idiomatic forms of music, especially the jazz avant-garde.