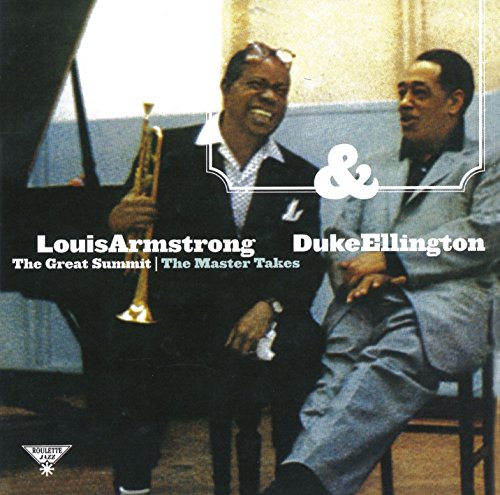 No two musicians defined the first half of the Jazz Century more than Duke Ellington & Louis "Satchmo" Armstrong. Duke was the dashingly elegant mad-genius of composition, a black Mozart who imbued jazz with an emotional sophistication and wit that will never be surpassed. Louis almost single-handedly popularized the art of the solo, liberating jazz from the rigid rules of ensemble playing and giving individual musicians a chance to express themselves. Unmistakable in sound, Satchmo's presence strongly defined every session he recorded on. The reasons are simple: when Satchmo put the trumpet to his lips and blew, a brilliant ray of sunshine would radiate from his soul, bathing the world in its exquisite light. Satchmo was a positive man overflowing with emotion, and his supreme goodness can be felt in every note he played and every line he sang. So it should come as no surprise that the collaboration of Duke & Louis would result in these recordings of tremendous warmth and humanity. Here was one of the greatest pairings in the history of popular culture—more romantic than Bogart and Bacall, more exciting than Barnham and Bailey, more swinging than Sinatra and Riddle. While Satchmo can't help but steal the spotlight, he graciously opens the album with the acknowledgement that the music is only happening at "Duke's Place." Duke makes Satchmo feel right at home, providing a sublimely swinging accompaniment while occassionally stepping out to show Pops his own chops. A few seconds of listening and you can't help but feel a part of the great mood that pervaded these sessions. Playing the Ellington songbook with the master himself was a refreshing change of pace for Satchmo, who had been endlessly cycling through his greatest hits night after night to adoring audiences. His enthusiasm shines through in his spectacular trumpet solo on "Black and Tan Fantasy." Satchmo even reveals a deeply introspective side on several of the album's ballads, particularly on "Solitude," "I got It Bad And That Ain't Good," and the rare "Azalea." Playing with Satchmo was also tremendously inspiring for the Duke, who composed and recorded the appropriately titled "The Great American" on-the-spot. These landmark sessions contain unrivaled versions of many familiar Ellington songs. An essential American classic, the album swings to the tune of true genius. Spend the extra money and get the 2000 reissue for superior sound and previously unreleased bonus tracks.