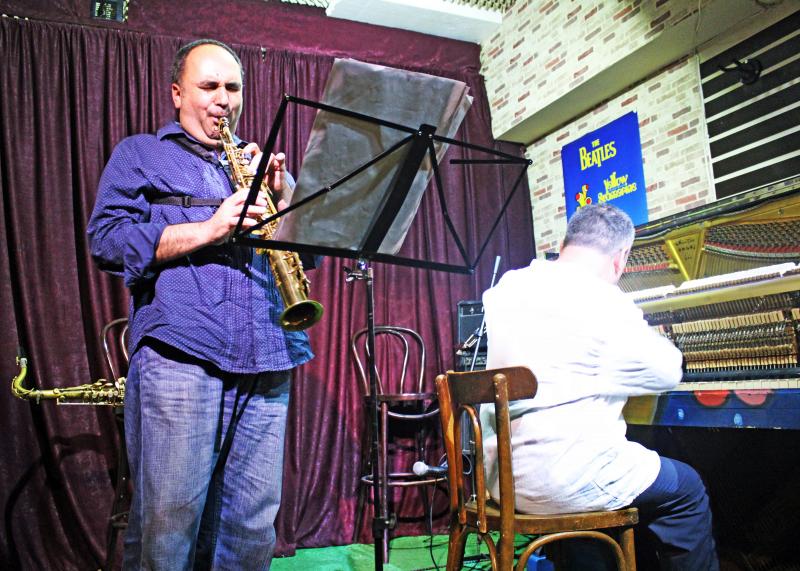 One of the most exciting additions to Yerevan's (Armenia) creative music scene has been the opening of Forsh Club in November of 2014. The venue is named after its proprietor's violinist and vocalist Vahan Gevorkyan's sobriquet. With its intimate ambience and perfect acoustics it hosts a variety of distinctive bands including the owner's own pop fusion ensemble the Re Mineur and such luminaries as the charismatic duo of saxophonist Armen Hyusnunts and pianist Vahagn Hayrapetyan.

On July 2nd 2015 Hyusnunts and Hayrapetyan opened the first set with an intriguing deconstruction of "Love for Sale." Hyusnunts' elegant agile lines meandered around Hayrapetyan"s percussive chords as ad lib ideas flowed between them with breathtaking facility and vibrant sophistication.

Hyusnunts, who is also Armenian State Jazz Band's leader, alternated between wailing acerbic soprano to breathy organic tenor with Coltrane-esque ease as the pair interpreted Armenian folk songs, standards and modern jazz tunes with the same urbane spontaneity and tender melodic touch. Ever the consummate improviser, Hayrapetyan incorporated even an accidental burst of noise artifact from a speaker into a rousing solo as he molded the harmonics of his instrument into innovative and delightful tonal structures. On the boppish pieces he accompanied his keyboard pyrotechnics with whimsically inventive scatting adding another layer to his engaging extemporizations.

Forsh Club's raison d'étre, according to its owner is to showcase musical excellence and give rising and established stars an outlet for their artistry. Hyusnunts and Hayrapetyan's concert on the 2nd of July definitely fit the bill. On that night one of the most original and compelling acts in the country expressed their unique vision to the delight of the attentive audience in this cozy and atmospheric listening room.