By MARK CORROTO
February 12, 2011
Sign in to view read count 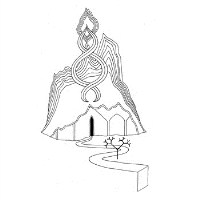 The opening scene in director David Lynch's movie Blue Velvet (1986) shows a placid neighborhood scene of a man watering his lawn. As the camera zooms closer and closer to the grass, the serenity of the landscape is peeled away to reveal a tumultuous battle of tiny insects in a life-and-death struggle that goes on outside of our familiar perspective.

The same can be said of these two minimalist improvisation pieces on Arena Ladridos. Recorded in Austin and Marfa, as a part of a Texas and Mexico tour, the trio presents a smoldering and at times an almost imperceptible array of sounds that focus on the possibilities of silence (or near silence).

A master of minimalist improvisation, Bhob Rainey can be heard in the company of today's free jazz superstars like Axel Dorner, Jack Wright, Jon Mueller, Alessandro Bosetti, and Greg Kelley his partner in Nmperign. This trio presents equal doses of improvisation and environmental tones, spreading an ambient construction, instead of structured tunes.

This is not music for the impatient, nor for Dick Clark's dance party. It is about the exploration of the minutia, but not the trivial. Cogburn's percussion is focused more on scrapings than the beat, and Jones' electronics makes use of her circuits' buzz and flutter to complement Rainey's breath. On the surface, nothing is happening here. Such is the verdict if played at low volumes without closer inspection., but at the micro-level the activity is blazing. Rainey is listening and reacting to the slightest movement by Cogburn and Jones' nerve synapses firing repeated instructions to alter pitch and tones. The rise and swell of energy is a tsunami for those living here close to the ground. It's just not apparent to anyone not scrutinizing the minimal.