By FLORENCE WETZEL
August 27, 2012
Sign in to view read count 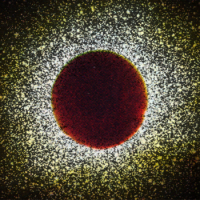 Founded in September 2010, the Insub Meta Orchestra (IMO) is an ensemble composed of several dozen improvisers from Switzerland and beyond. The group first explored its possibilities in seven separate concerts and then, in the summer of 2011, forty members hunkered down for a three-day musical marathon, which allowed it time and space to delve into a few pieces and explore the shifting line between orchestration and improvisation. The result of this group vision quest is Archive #1, a gripping electro-acoustic voyage that's a highly successful blend of intention and spontaneity.

IMO works with a broad palette of instrumentation, an intriguing mix that's elegantly presented and intertwined. This particular project includes traditional instruments such as saxophone, clarinet, trombone, guitar, cello, and bass; the less traditional spinet, accordion, banjo, and bouzouki; a few staples of the experimental including a theremin, laptop, and analog electronics; and the completely unexpected, namely a tennis racket and a typewriter. Although the music is produced partly by acoustic instruments, the overall sound is distinctly metallic; this is the poetry of machines, a praise song of metal and electronics.

Each of the six pieces has its own texture, but the CD works together as a whole to create an atmospheric suite. "Punkte und Flächen" starts with a breathy, sizzling sound, then moves slowly through a pregnant silence, adding slices of noise and blips of percussion and a whistling wind, gradually heating up into a clanking, furious intensity. "The Living Dust" is a deliciously eerie piece with a variety of mysterious sounds simmering just under the surface, while "Et si..." is centered around a drawn-out high pitch that provides a base for a variety of sounds that come and go. The group's dance with the pitch is an excellent example of its ability to set off everyday sounds and allow them to be heard anew.

ADVERTISEMENT
"Lava Underground" is a marvelous subterranean piece that grows in menace and slowly builds a burgeoning wall of sound, and "Miroir" (French for "mirror" or "glass") incorporates bits of a human voice, as well as the aforementioned typewriter. The CD closes with "Set Sail, Finally," an airy, eleven-minute song that simmers with potency. The sounds include isolated notes, clacking percussion, crying strings, and another visit from that underrated instrument, the typewriter. The sounds weave together throughout the piece, mostly in quick snippets, sometimes as sustained drones, and other times as shimmering fields, altogether creating a splendid meditation on space and noise.

One of the beauties of this music is how malleable it is to the imagination. The sounds are whatever you like: neurons firing, an iceberg shifting, computers talking back, a lawnmower gone rogue—anything is possible. This music is mysterious and perhaps mystical as well. Archive #1 is a remarkable achievement, a genuine sonic adventure that celebrates the pleasures of the unknown and the known, and reveals ever-deeper realms of musical possibility.