By EYAL HAREUVENI
February 18, 2008
Sign in to view read count 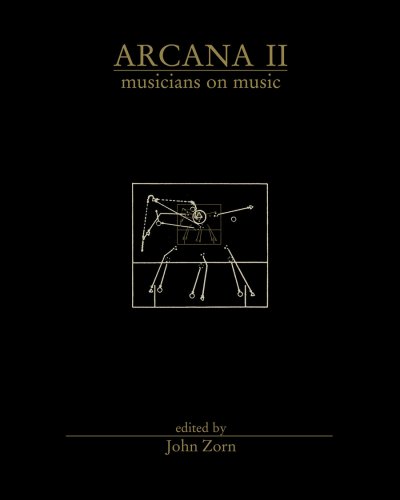 This is the second volume in an ongoing series in which avant-garde musicians write about their lives, their creative processes and what music means to them. The first volume was published ten years ago.

In his preface to the second volume, John Zorn—publisher, editor, composer, saxophonist and head of the Tzadik label—quotes Leonard Bernstein: "this will be our response to violence: to make music more intensely, more beautifully, and more devotedly than ever before." Zorn continues: "in times of oppression we must all work together, harder than ever, to preserve the beliefs and values we hold dear. Beliefs that unite us. Values that make the world a better place."

Zorn did not dictate a common editorial thread to the thirty musicians given a voice in the book, he simply asked each of them for a candid view of their art. Ground breaking composers like John Cage and left-of-center thinkers like Theodor Adorno and Walter Benjamin are often referenced as defining inspirations, but most of the chapters are distinguished by original and thought-provoking ideas.

Pianist Uri Caine explains, in his "Theme And Variation," how Bach and Beethoven, like saxophonists Charlie Parker and John Coltrane, "grappled with the same challenges and opportunities of using a repeating harmonic grid as a springboard for inspired composition and improvisation." Bassist Trevor Dunn considers the demands on the 21st-century eclectic musician in "For And Against Technique." Charming Hostess' Jewlia Eisenberg amuses on "More Fun Than Capitalism," an essay about her and "Benjamin In Nerdy-Sexy-Commie-Girlieland." Violin player Carla Kihlstedt traces back phases of inspiration on "Confessions Of A Sensualist."

Saxophone hero Evan Parker turns out to be a great storyteller in an excerpt from a work in progress titled 211 Maxims And Other Thoughts From A Life In Improvised Music, which is full of hilarious anecdotes about German drummer Paul Lovens' limited driving skills or trombone player George Lewis and his mighty snoring. Norwegian composer Maja Solveig Kjelstrup Ratkje delivers a useful and thoughtful "Nine Prequisitions For Inspiration." Reed player Ned Rothenberg explains in "The Challenges Of 'World' Music For The Creative Musician," how studying the Japanese shakuhachi flute and the different traditions of this challenging instrument helped create his own distinctive voice on other instruments. Composer J.G. Thirlwell tells us about one of the hazards facing a musician who goes for the extreme sonic regions—tinnitus—and how a composer can live with it.

A few of the essays are aimed at professional musicians; like pianist Sylvie Courvoisier's essay on "The Extended Piano" or Dave Douglas' analysis of saxophonist Booker Ervin's use of intervals in his compositions and its influence on his own composition. Other essays are surreal going-on bewildering; like saxophonist Steve Coleman's "The Lunar Cycle As A Point Of Departure For Musical Ideas," or drummer Milford Graves' "Book Of Tono-Rhythmology."

Zorn's frequent collaborator, Japanese Boredoms vocalist Yamataka Eye, brilliantly concludes the book with her observation, "I don't know what music is. Is there anything that is not music?" Cage could not have defined it better.