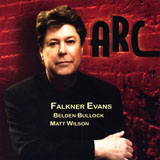 There has been considerable effort to redefine the means of expression regarding the standard jazz trio of piano, bass and drums. The world of contemporary popular music has been mined to provide unexpected material. Electronica furnishes additional textures which, perhaps, belie the inherent simplicity of a trio. Nevertheless, there are traditional stalwarts working to solidify the mainstream genre.

Pianist Falkner Evans' lack of cover story support within the industry is certainly not an indication that there is a deficit of talent; his playing and compositions are world class. He left his native Tulsa, Oklahoma for New York City in 1985 and, since that time, has quietly played in and around the city. He credits Kenny Barron as a major influence, and Evans' rich textural hues, aided by a gentle propulsion, certainly make the parallel an apt and descriptive comparison.

Arc is Evans' third release as a leader. He retains the services of drummer Matt Wilson, but replaces Cecil McBee, who played on Evans' two prior releases, with a long-time colleague—veteran bassist Beldon Bullock. It is evident that these musicians have been playing together for years.

Of the nine performances, five are Evans' original compositions. "Regatta starts the set with crisp and tight articulation. The melody is simply stated, and the group immediately speaks with one another in satisfying interaction. "Singing Darkness is slower paced but, with wisps of urbane conversation, is shrouded with a bit of mystery.

John Coltrane's "Central Park West is given a languid performance, tinged with hints of resignation and exhaustion. One can feel the chilled autumn air and see the rust colored trees. The melody is stated several times by Evans, without any real or particular development, but the melody is sufficiently haunting as to be satisfying.

With the majority of the tracks being between five and six minutes in duration, the proceedings are sometimes brisk. The listener may wish for more of an opportunity for group conversation. Instead, one should be satisfied with compact performances of depth and integrity.

At times, after a grueling day that has demanded an inexhaustible supply of mental acuity and physical stamina, one craves a dollop of predictability and a generous portion of ease. Falkner Evans delivers such music with exemplary style and technical facility. This is music to enjoy for the sheer exuberance of playing beautifully.