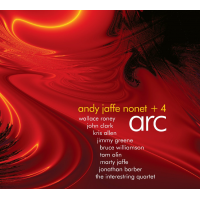 It is difficult to get past the opening, and title track, to Andy Jaffe's Nonet recording Arc. The reason being, it is a flawless piece of music as it is written, arranged and performed. There is just something about this little waltz that is cinematic, in both the sense that it feels like the soundtrack to a classic film and that it also projects a narrative in the mind. Jaffe weaves the Taiwanese Interestring Quartet into the seamless piece, but more about that later.

Jaffe, a pianist, composer, and educator has co-led the Bill Lowe-Andy Jaffe Repertory Big Band for decades now. His previous Playscape release was Mahattan Projections (2001), which was a re-release of a 1984 session with his former pupils, Branford Marsalis, Wallace Roney, and Marvin "Smitty" Smith.

Roney returns here alongside heavyweight saxophonist Jimmy Greene. Many listeners may be drawn by the two players, but both surrender any grandstanding in service to Jaffe and the music. Besides, the solos provided by fellow saxophonists Tom Olin, and Kris Allen are also quite exceptional.

The punch of "Brainworn" recalls those early 1960s Blue Note sessions where Alfred Lion was pleased when his artists inserted a swinging blues into a recording date. Jaffe includes two pieces he wrote for Max Roach's Double Quartet in the early 1980s. "Steve Biko," for the anti-apartheid activist and "Theme for the New Sixties. " Both pieces integrate a string quartet, not as an add-on, but a congruent piece of Jaffe's musical geometry. Both pieces maintain a forward momentum, with the string quartet ushered by bassist Marty Jaffe, and bass clarinetist Bruce Williamson.

Jaffe borrows a fragment of Duke Ellington's "Fleurette Africaine" to build his "Fleurette Chinoise," and arranges a carpet of nonet flourish as background to the soloists. "Go Down Moses," arranged for the saxophone quartet of Bruce Williamson soprano, Tom Olin baritone, Kris Allen alto, and Jimmy Greene switching to tenor, reveals just how lithe and graceful a sax quartet can be. Jaffe's arrangement takes on the heavy music with a sound light as a feather.

Arc; Brainworm; Steve Biko; In Case this is Goodbye; Fear of the Dark (miedo a la obscuridad); Fleurette Chinoise; Go Down Moses; Theme for the New Sixties; Now Then