By DAN MCCLENAGHAN
December 28, 2016
Sign in to view read count 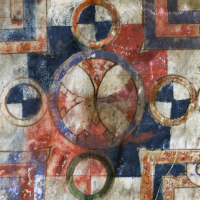 Guitarist Aram Bajakian has always played music that made things happen, whether it was with his contributions to Lou Reed's band, or Diana Krall's, or on his work on Tzadik Records, or his own self produced CD, 2016's superb Music Inspired By The Color of Pomegranate, an unofficial alternative soundtrack to the Russian movie of the same name. Dolphy Formations is another story.

Bajakian is up front about "[wanting] to create a piece where nothing happens." He ties the sound—created by his guitar (with much extended technique), trumpet and cello—to his daily meditation practice, times of quiet reflection and inward reverie. He finds that "about twenty minutes," to be the natural time frame of a meditation session; and about twenty minutes shaped up as the length of each of his three freely improvised variations of Dolphy Formations.

ADVERTISEMENT
Taking inspiration from Eric Dolphy's "Synthetic Formations," introduced to the guitarist by Yusef Lateef, Bajakian has created ambient soundscapes that sound nothing like Eric Dolphy's better known, "out there" music. Joined by trumpeter JP Carter and cellist Peggy Lee—in an ensemble dubbed Handmade Blade—the music does contain things that happen, but they happen slowly, almost beneath the level of conscious perception, in a sonic smear that doesn't call to mind any of the three instrument at hand.

These soothing, almost trance-inducing variations can serve as birth-of-a-star-system background hum, or a mind-cleansing meditation vehicle, or a soundtrack to a voyage to the afterlife, or the music you'd hear immersed in a cryonic suspension.