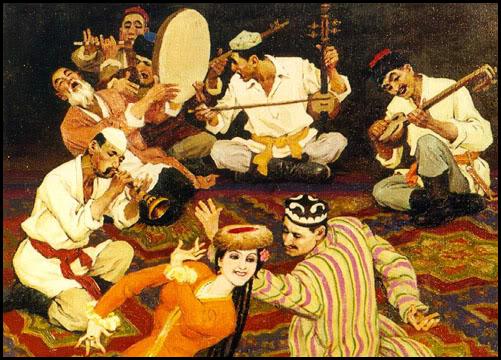 Does Islamic music have anything to do with the blues, jazz and rock? A whole lot, asserts Dr. Hussein Rashid, a native New Yorker who teaches religion at Hofstra University. In a lecture at Southern Methodist University in Texas, Rashid spoke of several waves of Islamic-Arabic immigration to America. Muslim Africans in slave-trade times were not allowed to practice their faith or play their ritual drums, and came to add their share to "Negro spirituals."

He played a clip of the Adhaan, the muezzin's call to prayer, followed by Mahalia Jackson's "Amazing Grace." There was a striking resemblance. Blues led to jazz. A clip of Billie Holiday's lament on lynching, "Strange Fruit," also reminded of Arabic music. In the repetitive recital of John Coltrane's "A Love Supreme," Rashid could hear the chant of "Allah Supreme." He compared the song to a Sufi chant. A newer song with ethnic roots is Dick Dale's surf rock standard, "Misirilou." Dale is of Lebanese descent; his tune was adapted from an old Ottoman Turkish song, with Arabic lyrics. Rashid also found elements of quarter-tone scales from the ancient Arabic in such melodies as Jefferson Airplane's "White Rabbit" and the The Rolling Stones' "Paint it Black."

The Andrews Sisters have amassed a big-city population of living fans, many quite young, and it's growing. At press time, Phillip Glaser, an American expat in Denmark, told me the old movie clip he posted on YouTube in January 2008 of the three sisters' 1941 war song, "The Boogie-Woogie Bugle Boy of Company B," had clocked 2,574,068 hits. A teenager commented, "Most of my friends call me nuts for liking the good old music from the fifties and earlier. I'm only 18 and I found the Andrew sisters two years ago, I was immediatly[sic] in love with their music and the innocence of their songs. My fav song is 'Don't sit under the apple tree.' It's so catchy and all. :) These days all artists seem to have no inspiration or originality. I'd say: 'Sit down, listen to the good oldies and take some notes! Yes that means you too Bieber!'"

A few said they hoped Patty Andrews knows how popular the movie clip is. Patty turned 94 on February 16. At last official count, in the mid-1970s, 75 million Andrews Sisters records had been sold.

Highlights In Jazz could be the longest-running concert series in the annals of New York City. Attorney and impresario Jack Kleinsinger started it in 1973, and has held some 325 concerts. Jack grew up in a jazz family. His father and other members were steeped in the music. So while he taught in public school, went to law school at night, then worked as an attorney in the Lindsay administration, Jack listened to live jazz and befriended musicians.

"The late Zoot Sims, and Bucky Pizzarelli, among others, said, 'You're comfortable with musicians, you love the music, why don't you take over a club, or rent a hall and get it out of your system?,'" he told DailyNews.com.

Musicians: What Other Instrument Would You Play?

"Even though you play the instrument of choice, what instrument would be your second choice that you always appreacted[sic] and felt like playing?" That was the question on the June Jazz Friends blog, on Linkedin. For the Huntsville, Alabama pianist-arranger and teacher Pete Harrison, the answer would be his "hobby," the trombone. "And yes, I pull it out at some of the jam sessions that I run here in H'ville. (How do you know a trombone player's knocking at the front door? He's wearing a Domino's Pizza delivery hat....) Guitar is one of those things that I'd like to do, but never seem to have enough time to really get some skills together on it. I pull it out every once in a while and play for a half hour or so. Pretty slowly. But that's ok. It's a little break from the mountain I set in front of myself so long ago when I heard Oscar Peterson play and said that I had to learn to do that..."