By GENO THACKARA
September 25, 2017
Sign in to view read count 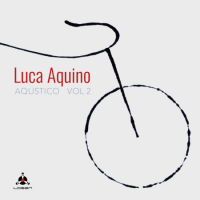 Luca Aquino is the kind of player who doesn't just look at or study an instrument, but at some point has to ask "and what else can it do?" His innate feel for the sound of the trumpet gives him a warm natural tone, though his career has included plenty of experimentation in processing its sound by other means as well—a fitting choice for someone equally interested in playing straightforward acoustic jazz or paying tribute to the Doors.

Not content to expand his range in music alone, Aquino intended this recording to launch a much larger endeavor: a 3000-kilometer summer bicycle tour across Europe that would include giving performances each night and raising awareness of UNESCO's mission of arts/culture preservation, capped off with a slot at the 2017 International Oslo Jazz Festival. It was most unfortunate that the plan unexpectedly broke down due to a health issue, but the recording still stands solidly as a colorful and forward-thinking work on its own.

Aqustico Vol. 2 is a simple affair noticeably pared-down from the quintet that made the previous installment (Tuk Music, 2013). Carmine Ioanna remains from that earlier session, this time stepping up as equal duo partner, and the pair are happy to take advantage of having the space to themselves. The trumpet and accordion make superb tonal partners in painting ambient sounds or weaving almost-danceable lines; jazz melody and rhythm, eastern European folk and touches of avant-garde all make natural partners in the mix.

Sometimes the players alternate lead and rhythm parts over and under each other, while other pieces have them weaving precise lines in fluid counterpoint. Occasionally the layering seems to be done with two accordions or horns at once, which is done with on-the-spot looping rather than overdubs. Aquino and Ioanna both use some electronic effects, though these are judicious enough to be barely noticeable—some dramatic echo here or maybe a little distortion there. The two are most interested in having a conversation in the moment, and those little tweaks are meant to subtly shape the sound as it goes along.

The only other element is some light rattling percussion during an abstract interlude in the late stretch, and it's likewise as minimal as needed to build the mood. These pieces aren't afraid to drift for a few minutes at a time before leading up to whatever catchy hook or weaving gypsy dance is around the next turn. Like Aquino's planned journey, they don't see any point in merely sticking to the straight and obvious roads; the richer big picture requires taking all those unpredictable peaks and valleys equally in stride.