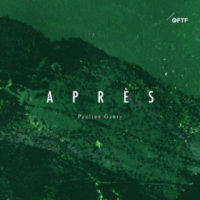 Ganty is one-third of vocal harmony trio The Swinging Ladies, an Andrews Sisters style group devoted to renditions of swing standards. Après is about as far from the Andrews Sisters as vocal jazz can get—as a solo artist Ganty occupies a much more contemporary space, her songs and performances blending romance, mystery and beauty together to create something far removed from bugle boys and boogie woogie.

Ganty has been compared to Anita O'Day and Norah Jones but her vocals on Après seem more reminiscent of Scandinavian singers like Silje Nergaard and even Stina Nordenstam. The similarity is most apparent on "Under The Moon," an untypically upbeat song underpinned by the momentum of Fabien Iannone's bass, and the melancholy "The Last Goodbye." Ganty's compositions are graceful, their stories often enigmatic and open to varied interpretation and, like Nordenstam in particular, often invoking unsettling moods. She recites the words of "L'Hêtre" over a free, possibly improvised, backing then closes the song with an ethereal, wordless, refrain. "After" brings the album to a close with a touch of mysticism, heightened by the drone of arco bass and harmonium, as Ganty sings of "Quietness, over the immensity of infinity. Beauties, undressed to give us their naked secrets."

Nick Drake's "Way To Blue" is the only song not composed by Ganty. Noé Macary opens with spare, delicate, piano before Ganty enters. Her voice is fragile, supported by understated instrumentation and seemingly about to fracture at any second. It's a beautiful, heartrending, version that matches and perhaps even exceeds the emotional intensity of Drake's string-laden original.

Après is available as a CD, vinyl album or download. This review is based on the vinyl version, with notably high- quality sound that does full justice to Ganty as a composer and singer. Vocal jazz has a new and highly welcome star in its midst.

Side A: Under The Moon; They Say; The Last Goodbye; Tomorrow’s Child. Side B: Way To Blue; New Senses; L’Hêtre; After.