Appetite for Self-Destruction: The Spectacular Crash of the Record Industry in the Digital Age

By MARTIN GLADU
February 4, 2009
Sign in to view read count 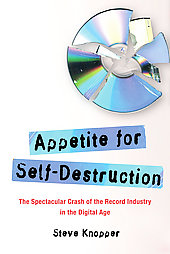 Like the print industry before it, the music business underwent profound changes during the 1990s and 2000s. During the early years of this cycle, at a time of plump profits and ballooning budgets, the business adopted the CD format. More recently, faced with multiplying online distribution channels, record companies and artists have striven (mostly in vain) to hang on to those profits. The "democratization" of distribution means that things will never return to the halcyon days.

In Appetite for Self-Destruction: The Spectacular Crash of the Record Industry in the Digital Age, Steve Knopper, a Rolling Stone contributing editor, proposes a chronology of the key events that, with the boy bands craze, offered a false dawn of financial sustenance, but was all too rapidly followed by the "spectacular crash" alluded to in the book's title. Commentaries hammering out details of how and why those in charge erred strategically in their marketing of new technologies are organized at the end of each chapters, into eight brief sections dubbed "Big Music's Big Mistakes."

From the killing of the single to the Recording Industry Association of America's litigation against individuals—by way of DRM locks, pricing policies, failed formats and trade initiatives, expensive (and costly) promotional strategies, and missed opportunities—Knopper circles his prey, mainly the major labels, and clasps his claws around a thesis corroborated by interviews and well-researched side stories.

In fact, the book bears strong echoes of the investigative reporting of Fredric Dannen's Hit Men (Random House, 1990) and William Knoedelseder's Stiffed (HarperCollins, 1993). Stan Cornyn's convivial and conversational tone in Exploding (HarperCollins, 2002) is also brought to mind. That said, whereas the first two titles' profiling of the business' "colourful characters" fit their argument, Knopper's portraiture does not meaningfully substantiate his rhetorical stance. Conversely, when facts predominate over anecdotes—such as during Knopper's historical recount of the patents that went into the invention of the CD and Apple's iPod—the work acquires a credibility it lacks elsewhere.

References to consumer behaviour and psychology, as well as a serious discourse on copyright, are lacking. But Knopper does review the events and factors that have led to the present state of affairs, factors which he tracks back to the disco boom of the 1970s.

Overall, the book does teach an important lesson, which is best summarized by Kiefer Sutherland's character on the hit TV show 24: "The difference between success and failure lies in the ability to adapt to your enemies." And, for that, Appetite for Self-Destruction deserves attention.