By LAWRENCE PERYER
October 7, 2011
Sign in to view read count 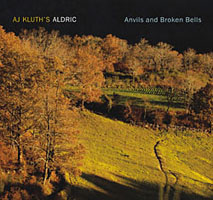 While there are many interesting sounds on Anvils and Broken Bells, this release from Chicago-based improviser AJ Kluth (credited to his ensemble ALDRIC), they do not necessarily add up to an entirely compelling work.

Kluth and his crew do conjure up some seductive ambiance, with their arsenal of horns, guitars and effects machines. Guitarist Toby Summerfield capably offers a diversity of tones, if not approaches. The moments when Kluth switches to melodica are especially tasty, as in the interplay between the leader, Summerfield and drummer Quin Kirchner on "Saskatoon."

That said, this record never seems to offer more than a sum of the parts that came before it. There are hints of the Miles Davis of In A Silent Way (Columbia, 1969), but also a heavy dose of late period Ronald Shannon Jackson. Never as bombastic or assertive as Jackson, many of the improvisations nonetheless reference his post-Decoding Society work of the early 1990s, especially the criminally neglected Red Warrior (Axiom, 1990).

There is much to enjoy about Anvils and Broken Bells, and it certainly has its merits as a chill out, end-of-the-evening record, but those looking for a little more heft in their improvisational excursions might be better served elsewhere.