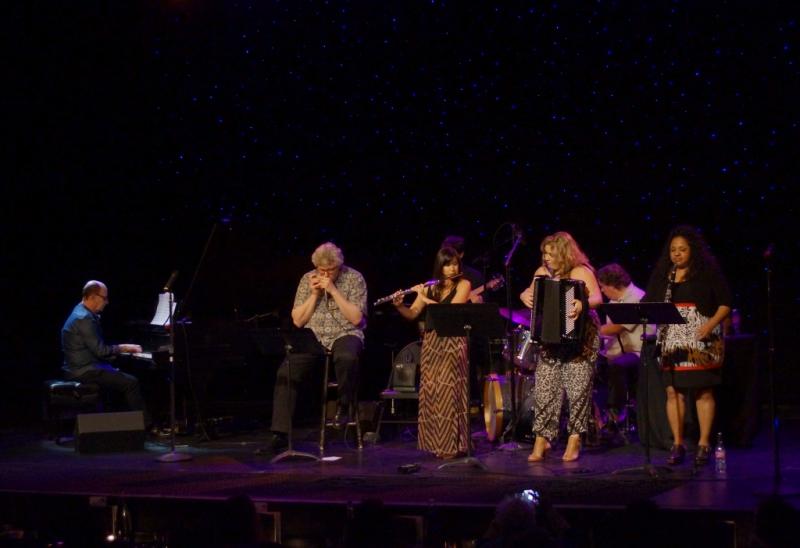 Showing his stylistic breadth, Adolfo followed with Cole Porter’s “Easy to Love,” demonstrating how effortlessly a North American standard can be rejuvenated via a Brazilian jazz interpretation.

Brazilian pianist, composer, arranger and educator Antonio Adolfo made a rare West Coast appearance for a one- niter on May 22 at a storied downtown Seattle, Washington venue, The Triple Door. The Rio de Janeiro native, now based in Florida, brought harmonica ace Hendrik Meurkens from New York for the performance as part of a national tour to promote his latest recordings, Copa Village and Tema, both on his AAM Music label.

A prolific recording artist, Adolfo began his career in the mid-1960s as a teenager in Rio fronting his own samba-jazz combo, the Trio 3-D. In the following decades, he stayed current with trends in funk, fusion and jazz. His recent recordings find the artist reinventing himself and going back to his roots, emphasizing his improvisational talents as an interpreter of bedrock Brazilian styles, from bossa nova to choro. For his part, the well-recorded Meurkens has long been an exponent of Brazilian music and was featured on Adolfo's Copa Village project, along with the composer's vocalist daughter, Carol Saboya, and a quartet of Brazilian rhythm players. For the Seattle date, Adolfo relied on the talents of several local musicians who are well-schooled in a variety of Brazilian styles. Bassist Tim Carey and drummer Jeff Busch rounded out the rhythm section, while Adriana Giordano, a native of the Brazilian city of Porto Alegre, filled in admirably for Adolfo's daughter Carol, his usual vocal foil. Given a paucity of time to rehearse a full set of his original material, Adolfo welcomed to the stage three members of the Seattle-based group En Canto to explore the folkloric side of Brazilian music. Accordionist Jamie Maschler, flautist Meese Agrawal Tonkin, and clarinetist Rosalynn De Roos proved to be crowd pleasers on several works that tapped the rhythmically- jaunty spirit of such northeastern Brazilian styles as forró and baião.

The pianist opened the set reverentially with a long solo prelude to introduce a hallowed work by mid-20th Century choro composer and mandolinist Jacob Do Bandolim. Showing his stylistic breadth, Adolfo followed with Cole Porter's "Easy to Love," demonstrating how effortlessly, in the right hands, a North American standard can be rejuvenated via a Brazilian jazz interpretation.

For a reading of Antonio Carlos Jobim's lovely ballad "Luiza," Adolfo and Meurkens were showcased in a duo setting, the longing quality of the tune the perfect vehicle for Meurkens' emotive harmonica work and Adolfo's precise, elegant touch. "Show de Bola," a rhythmically-rambunctious up-tempo samba composed by the harmonica player, served notice that the German musician is also a gifted melodist. Adriana Giordano added an expressive vocal that matched the tune's sunny attitude.

Adolfo employed a bit of self-effacing humor in introducing his biggest hit, "Pretty World," which was popularized by Sergio Mendes and Brasil '66 in 1969. Although it never ascended to the stratosphere of popularity attained by a handful of bossa standards authored by Jobim, Luiz Bonfá and Marcos Valle, the song's upbeat, catchy English language lyrics by the noted songwriting team of Alan and Marilyn Bergman and Adolfo's effervescent melody led to it being covered dozens of times by noted artists. The instant the pianist launch into the tune's signature two-bar intro, the audience recognized what was coming and rewarded the composer with warm applause.

The most moving moment of the night came when local Brazilian music aficionado Samia Panni opened the set by introducing Adolfo and the quartet. A vocalist who learned both Spanish and Portuguese as a youngster while on diplomatic postings with her parents to several South American nations, Panni has hosted the weekly Raízes radio program on Seattle's KCBS for the past three decades. "This is the man," she said emotionally, gesturing toward Adolfo, "who wrote the songs I used to learn how to sing Brazilian music."

Giordano and several other cultural activists created Brazilian Nights PNW to promote Brazilian music and culture in the Pacific Northwest. "The focus is to bring high quality Brazilian music that has not been played much in this part of the country," she told AAJ. "In addition to the performances and the collaboration with local artists, we also coordinate workshops with the Brazilian musicians."

The growing interest in Brazilian music has led to local appearances by such acclaimed musicians and vocalists as the Assad Brothers guitar duo, vocalist Paula Santoro and pianist Rafael Vernet, guitarist Romero Lubambo and singer Maucha Adnet, as well as singer and guitarist Filo Machado, among others. After the success of the Adolfo-Meurkens engagement, Brazilian Nights PNW is contemplating the booking of such artists as pianist Tania Maria, guitarist Toninho Horta and mandolinist Hamilton de Holanda. "Samia was the one who introduced me to Antonio Adolfo and put the bug in my ear about bringing him to Seattle," Giordano explained. "And just look at how great it all worked out!"