Anton Fig: Behind The Bandstand, Part 2 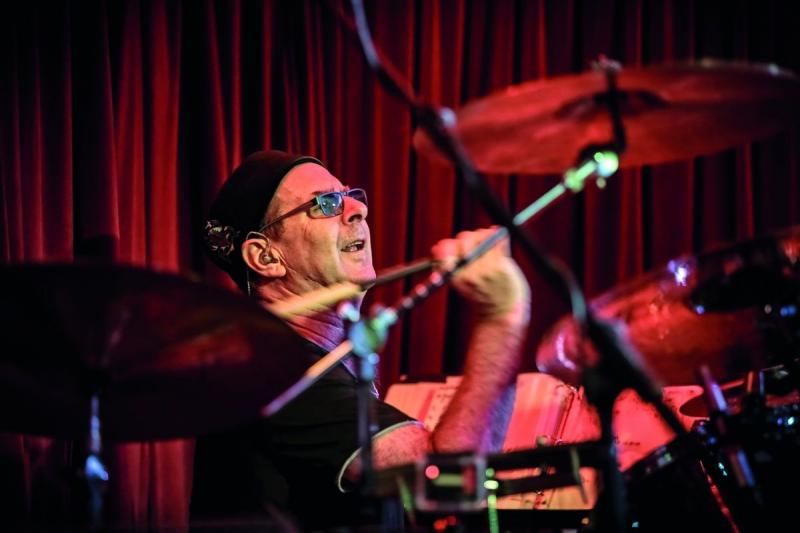 The last chord has been played, the lights have been dimmed, and the iconic NYC skyline (in miniature) behind Dave's desk has been disassembled and stored. The airing of the finale of "The Late Show With David Letterman" on Wednesday May 20th and the accompanying performance by The CBS Orchestra marks the end of a television era.

This past year, Anton Fig teamed up with guitar wizards Eric Johnson and Mike Stern to release Johnson's latest album Eclectic. We caught up with Fig after a performance with Johnson and Stern to discuss their rehearsal process, the album and tour.

All About Jazz: What was the rehearsal process like? You were talking earlier about how you went down to Texas to rehearse?

AAJ: Whose idea was it to do "Red House?"

AF: Not sure -We recorded it, its on the album, yeah it's a good encore. It's so much fun playing with these guys.

AAJ: So you've got your small tom to the right now, why'd you do that?

AF: Yeah, well you know a long time ago I saw Tony Williams do that, and I thought, it's actually kind of fun because you can hit it with your right hand, and you've got the high drum to the right, you can go round the toms and it sounds a little bit different. But also, often I can't get the middle tom where I want it. Sometimes it hits the bass drum if I've got a big bass drum and then it's up too high. So if I've got it like this it sits up really well. And then I often play a 3 piece kit, so it's just like two toms, so I've still got that. Then I've got high tone on the right as well. So, it all works out nicely.

Now, the question looms -"what's next?" The finale of The Late Show marked the end of a 29 year television relationship with Paul Shaffer and David Letterman. All in all, this trio has contributed to two networks, six emmys, 22 seasons, and 6,028 episodes of comedy and music. For Fig, the answer is, "plenty."

On May 30th, he'll be in the house band for The 2015 Rock and Roll Hall of Fame Induction Ceremony. Airing on HBO, this primetime special will feature performances by Ringo Starr, Paul McCartney, Beck, John Legend, Jimmy Vaughn, Stevie Wonder, and a host of other legendary artists. Clearly a staple of the broadcast industry, Anton Fig shows no sign of slowing his rolls.