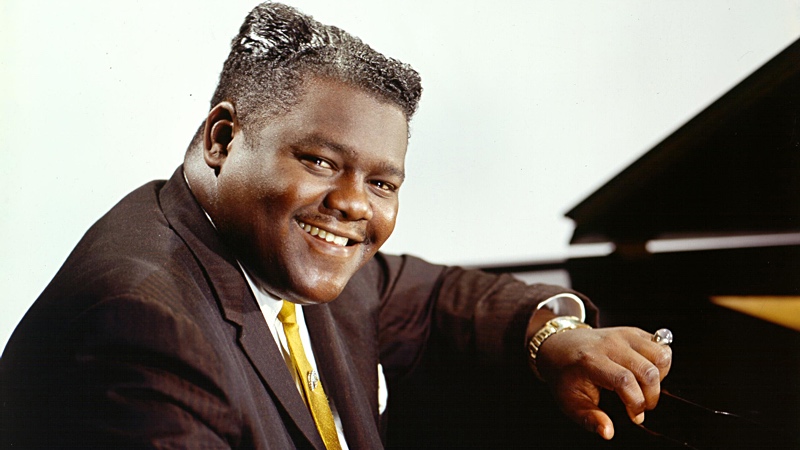 By C. MICHAEL BAILEY
October 27, 2017
Sign in to view read count
"A lot of people seem to think I started this business...But rock 'n' roll was here a long time before I came along. Nobody can sing that music like colored people. Let's face it: I can't sing it like Fats Domino can. I know that." —Elvis Presley, Jet Magazine, 1957

What's in a name? If that name is Antoine Dominique Domino Jr. it is elegance, exuberance, and unbounded generosity. Known to 70 years of music making as "Fats," Domino can be credited for adding the New Orleans File to Rock & Roll's unruly Gumbo. But it is all past tense now, Antoine "Fats" Domino passed away from natural causes, Wednesday, October 25, 2017, in his home in Harvey, Louisiana. He was 89-years old.

Prior to 2017, we experienced a lengthy plateau where the four architects of rock & roll music: Chuck Berry, Little Richard, Fats Domino, and Jerry Lee Lewis enjoyed their shared twilight. If Berry was rock music's great theoretician, Richard (with Elvis Presley) its unbridled sexuality, and Lewis, its unhinged menace and moxy, then Fats Domino was its secret seasoning in the magnificent bastard of a musical genre that made it complete. Berry preceded Domino, passing way on March 18, 2017. This leaves the two wild souls of the music with us.

In his tribute to Johnny Cash, another stone mason of rock, on that artist's death in 2003, commentator and VH1 Executive Director Bill Flanagan put forth this observation on the CBS program Sunday Morning:

"It's becoming more apparent with every year that goes by that the period from the mid-'50s to the mid-'70s was a golden age for popular music. To have lived in the era where Cash and Presley and the Beatles and Stones and Aretha and Dylan and Miles Davis were around is like to have lived in Paris during the time of the impressionists.

That era is moving away...We can assume that these musicians who loom large in our culture will always be around. They won't. We should appreciate them while we have them because someday we'll turn around and they'll be gone."

Today, we stand in the vestibule of that reckoning with the passing of Fats Domino.

What was it, exactly, that made Domino so iconic and so essential a part of rock music? That turns out to be pretty easy. It was his left hand. Yes, Domino added some gris-gris mojo to that Meade Lux Lewis and Albert Ammons left-hand driven boogie woogie he had been hearing and the result was "Ain't That a Shame" and "Blueberry Hill." Domino's piano style derived directly from first, fellow Creole Louis Moreau Gottschalk and Jelly Roll Morton. It is a germinal style that emerged from the totipotent New Orleans area to inform rock & roll and the rest of American Music.

Fats Domino will be justly remembered for his smile and giving spirit, elements that helped give rise to the most potent musical movement in American History.