By BRUCE LINDSAY
November 8, 2011
Sign in to view read count 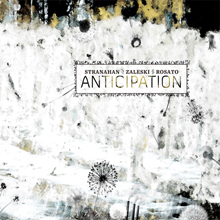 Colin Stranahan, Glenn Zaleski and Rick Rosato describe their trio as a "leaderless" jazz ensemble—a democratic aggregation. Anticipation is the band's first album, and provides plenty of evidence that such a democratic approach to jazz can have clear musical rewards.

The trio was the idea of Montreal bassist Rosato, drummer Stranahan—probably the best known of the three and a past member of Herbie Hancock and Kurt Rosenwinkel's groups, and who gets his name at the front of the list, and pianist Zaleski, who gets the most composer credits (three, to Rosato's two and Stranahan's one). So far, so fair. The music is, thankfully, the clincher: a vital, lively, mix of tunes on which each member of the trio impresses but no single player emerges as the kingpin. Indeed, even though each of the original tunes is credited to one or other of the band members, they are all collaborative efforts—and each tune was recorded in one or two takes.

Rosato's compositions—"Clark" and "Origami"—are the most readily accessible of the original tunes. Stranahan's "Gentle Rain" paints a musical soundscape that perfectly captures its title: a delicately romantic piece. Zaleski's tunes show the greater range of styles and moods. "On The Road" is an edgy, angular, piece that resembles Django Bates' re-workings of Charlie Parker numbers. "Deep Blue" is a much more fluid piece, with a relaxed feel despite building occasional moments of tension.

The trio approaches the standards with flair and imagination. "Boplicity" is particularly refreshing, the Miles Davis and Gil Evans tune getting a slow shuffle rhythm beneath Zaleski's melody line. The pianist opens "I Should Care" with a beautiful but brief solo, before Stranahan and Rosato join in to give the tune a touch of urgency.

Anticipation is an impressive debut from three independent-minded but strongly collaborative players: a trio that may lack a leader, but doesn't lack a sense of direction.

All The Things You Are; Deep Blue; On The Road; Clark; Origami; First Rain; Anticipation; Boplicity; I Should Care.