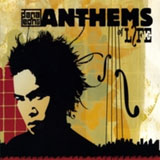 According to some dictionaries, anthems connote praise and sacredness. In most cases they are songs of celebration. Life, and how we live it creatively and productively, is to be celebrated as praiseworthy and sacred. Multi-instrumentalist and composer, twenty-seven year-old Dana Leong does this effectively, vividly and without hesitation.

On Anthems of Life, Leong has combined his diverse talents into an album replete with groove, blues, dancing rhythms, and serious messages. The "high-stim" characteristics of the recording are something to adapt to, but who shies away from the excitement of the bright lights of Times Square?

The lyrics of the ten songs are as captivating as the electronic and acoustic vibrations that accompany them. The songs find their origins in hip-hop, but this is no surprise. It is actually comforting that an artist of this generation has instilled his poetry with universal vision; a vision that permeates the state of art, music, race and the world to lift them up and bring them to an attention that is broad, and not simply for a select few.

Samples that stress the attraction of the sound abound from Leong's laptop. The programming choices wrap themselves around the words that are sung. Leong chooses to play both trombone and cello in perfect locations, which are both celebratory and programmatic; the two instruments act vocally, like vocalist MC Baba Israel. The drums are acoustic and provide a pleasurable pacemaker.

From the very beginning of the recording onward, it is clear that music is considered the key to survival because it is a labor of love; it opens the minds and hearts of all those who partake. Leong exercises his knowledge of music outside of popular culture, for there are reflections of Kurt Weill in "Another Perfect Catastrophe," reggae in "Get Up," full-blown R&B in "Black & White," liturgical in "Opus One: Why I Cry," and jazz in "Live Vibe." These different types of music move throughout all the songs because they are part of Leong's vocabulary.

The most powerful and clearly spoken song is "One Life." It charges with hope, longing, desire and striving to overcome life's tragedies. A crescendo that never really reaches its complete height becomes the dynamic that contrasts the words, accompanied by repeatedly strummed chord phrases, which imply a gentle innocence. The crescendo embraces the expression of love, need and the reality that there is only one time we go around.

The profundity and variety within his music emphasizes what Leong values: "The hoops that I jump through, people with conviction, ancestry, love, friends, the future, embarrassment, comedy, foolishness, & meditation." These are the words of no ordinary musician; rather they come from an exceptional young one.

Bonified; Another Perfect Catastrophe; BigUp; Opus One (Why I Cry); One Life; Free Drinks for 50 (Interlude); Get Up; Live Vibe; 2971 AD; Inner Visions; Black & White.