By ALEX MARIANYI
October 4, 2011
Sign in to view read count 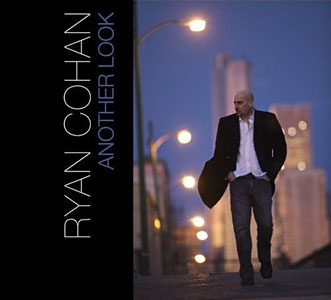 Unlike many of his past releases, Ryan Cohan's Another Look focuses heavily on group interaction and improvisation. Penning all but two of the tunes on the album, the pianist's arrangements allow his musicians maximum flexibility. That the CD's main quartet has been playing together since 2003, and was on the road for six straight weeks before this session, further adds to the group identity found on this recording.

The main quartet does, indeed, make this album come alive. Lorin Cohen's bass work raises itself to a level where it must be noticed his solo on "Song For My Grandfather" captures the song's sensitivity, but also pushes it forward rhythmically. On "Monk'n Around," he sets the tone of the entire recording with his solo intro, and during the track's long stretches, drummer Kobie Watkins takes a back seat to Cohen's contribution to the groove. When he is the featured member of the groove, like on the album closer "Steppin' Up." Watkins adds a real dance-like quality. Much of Geof Bradfield's playing shows off his marvelous technical skill; still, the multi-reedist takes care to expose his sensitive side on "Gentle Souls."

Cohan takes care to exhibit his own playing as well, with his solo intro to "Song For My Grandfather." In ensemble playing, he can be found as the lead instrument, delivering the melodies on "Song For My Grandfather" and "Joshua." Much like Bill Evans, Cohan further stimulates group interaction by selflessly providing creative information; he even adds to the groove in a way that resembles Thelonious Monk. Cohan also shows off his eye for personnel; in addition to his working quartet, he invites two guests: vibraphonist Joe Locke and percussionist Steve Kroon. While Locke contributes some stirring solo work, Kroon's atmospheric sounds really bring together the mood of the title track.

Since the days of John Coltrane's famous mid-'60s quartet, many jazz musicians have attempted to put together and keep a regular working small group, to allow for maximum communication and improvisation. Cohan's Another Look catches this magic of interaction.