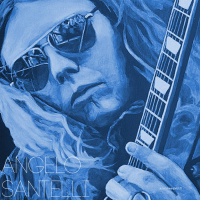 Floridian Angelo Santelli's debut eponymous recording is a richly mixed bag. An accomplished slide guitarist with associations within the Allman Brothers Band family, Santelli might be taken for granted as a jam-band blues knock off. This is before a first listen something else altogether. On nine disparate original compositions, Santelli reveals a much broader and deeper vision for his music. In fact, the most jam-band song is the opening "Mr. Road Man" on which Santelli reveals is acoustic and electric standard guitar playing and an absolutely corrosive slide guitar solo that easily melds the styles of Duane Allman and Derek Trucks into one personally unique style. Solid vocals by Alex Mays anchors a well-structured modern rock song.

Santelli proves equally adept on dobro, an instrument he uses through this recording. The brief "Dobro Awesome" reveals the lyrical mind of the artist while "July Song" pulls influences from everywhere. This is complexly arranged music beyond the typical music called rock today. Blues—jazz—rock— musical freedom with funk in the trunk. On the short interlude "Synthesis," Santelli forgoes the dobro for some more of the same scorched earth slide guitar he demonstrated on the opening, positioned slightly behind the opening synthesizers, playing a simple descending-ascending figure.

The center if the disc are "Nine Lives, Nine Tales (Parts I & II). This suite is a eutectoid of all the rock improvisation from the Grateful Dead through the Allman Brothers Band, Little Feat, Phish, The String Cheese Incident and Widespread Panic. While squarely out of this tradition, Santelli takes things even further, planting his spear in the ground of this music and killing all preconceptions to it. His slashing slide style will find a place beside Allman, Trucks, and Sonny Landreth and exist as an extension of the art W.C. Handy first heard at the Tutwiler, MS train station in 1904 and recounted a million times in telling the history of the blues.